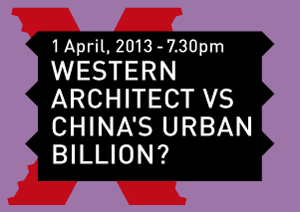 On Monday 1 April, we will continue our series ‘The Next Decade’ with a lecture by Beijing-based architect John van de Water.

John van de Water graduated from Delft University of Technology with a Master of Architecture degree in 1999. The same year he co-founded NEXT Architects Amsterdam. In 2004, he founded NEXT Architects Beijing. NEXT Beijing is currently one of the largest Dutch architecture firms in China. Van de Water has published, taught, exhibited, lectured and participated in juries and advisory boards around the world. Work and thinking has internationally been recognized by numerous awards. In 2011, he was the youngest Dutch architect ever to publish a semi-biography, called ‘You Can’t Change China, China Changes You (010 Publishers)’.

In his lecture, ‘Western Architect vs China’s Urban Billion?’ Van de Water will question the limits of Western architectural thinking in the light of the next Chinese urban decade. Based on a series of anecdotes, critical self-analyses and (research) projects, he aims to formulate new focus-points and news tools for an architect with China’s Urban Billion as a working field. Are Western design skills able to evolve in a cultural context as radically different as that of China? And how to equip yourself as an architect for China’s Urban Billion?