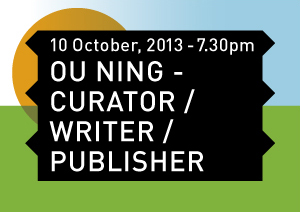 We’re excited to start the new fall lecture series themed ‘Down to Earth’ on Thursday 10 October. Speaker will be writer and curator Ou Ning, who will lecture on his Bishan Project.

The Bishan Project started out from wanting to address the imbalances between cities and the countryside that have manifested grim realities, such as the deterioration of agricultural industries, rural villages, and farm laborer empowerment, and are the direct result of excessive urbanization. The project relies on the experience of the rural reconstruction movement led by Chinese intellectuals since the Republican Era, as well as the cultural practices of various rural regions in Asia.

Adopting the intellectual resources of China’s traditional agricultural industry and rural philosophies, as well as leftist or even anarchist ideas, the Bishan Project aims to combat the encroachments of globalization and neoliberalism. By using art and culture as our first point of entry, the founders ultimately hope to influence politics and economics with their work in rural areas.

Ou Ning was born in Guangdong, China in 1969. He now lives and works in Bishan Village, Anhui Province where he founded Bishan Commune (from 2011), an intellectual group devoted to rural reconstruction movement in China.
As a publisher, he is known for his seminal book New Sound of Beijing (1997) and his literary bimonthly journal Chutzpah! (since 2011). As a curator, he initiated the biennial exhibition Get It Louder (2005, 2007, 2010) and curated the sound project ‘Awakening Battersea’.
He was the chief curator of the 2009 Shenzhen & Hong Kong Bi-city Biennale of Urbanism and Architecture. He curated ‘The Solutions: Design and Social Engineering’ for the 2011 Chengdu Biennale and co-curated Liu Xiaodong’s Hotan Project with Hou Hanru in 2012 and 2013.

As an artist, he is known for urban research projects such as San Yuan Li (2003), commissioned by the 50th Venice Biennale, and Meishi Street (2006). He is a frequent contributor to various magazines, books and exhibition catalogues and has lectured around the world.