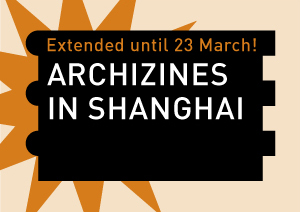 The critically acclaimed touring exhibition Archizines will be presented in Shanghai at the University of Hong Kong / Shanghai Study Centre.  The show is prolonged until 23 March 2014.

Archizines celebrates the resurgence of alternative and independent architectural publishing around the world. The touring exhibition, curated by Elias Redstone and initiated in collaboration with the Architectural Association, now features 100 architecture magazines, fanzines and journals from over twenty countries that provide an alternative to the established architectural press. Edited by architects, artists and students, these publications provide new platforms for commentary, criticism and research into the spaces we inhabit and the practice of architecture. They make an important and often radical addition to architectural discourse and demonstrate a residual love for print matter in the digital age.

The exhibition features titles from the collection alongside video interviews with their creators in a bespoke display. Each publication has selected one issue to represent their approach to publishing and they are all available for visitors to read, bringing together publications from countries as far afield as Australia and Argentina, the UK and USA. The original Archizines collection will be transferred to the National art Library at the Victoria & Albert Museum, London.

Opening: Saturday, 11 January, 3pm
The exhibition will be opened by a seminar on the Future of the Architecture Magazine, followed by drinks to celebrate the new show.

A panel with Elias Redstone, curator of Archizines, Li Juan, editor of Urban China and Cruz Garcia, co-editor of WAI (with Nathalie Frankowski) will discuss the future publishing on architecture. Daan Roggeveen, curator at HKU/Shanghai Study Centre will moderate the panel.

The Press About Archizines
“An important cohesive resource for the design world.”
– Archdaily

“With the Archizines exhibition, pamphlet architecture is back.”
– Architectural Review