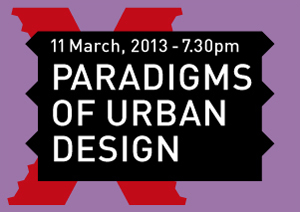 On Monday night, we continue the lecture series ‘The Next Decade’ with Alan J. Plattus of Yale University speaking about ‘New Paradigms of Urban Design: Itineraries, Infrastructure, Infill’.

Contemporary urbanism appears to be driven and shaped by increasingly large public and commercial projects, bounded by the arbitrary limits of their sites forming isolated enclaves within  urban regions.  The form and scale of these enclaves, and their replacement of traditional fabric and patterns of urban life, contribute to the fragmentation of the urban grain in cities around the world.  This is dramatically manifest in the rapidly urbanizing and modernizing cities of China. Nevertheless, there are emerging alternative models and strategies of urban intervention and development. These new paradigms insert new and traditional social, cultural and civic programs into the city in innovative and productive ways.

Alan J. Plattus is Professor of Architecture and Urbanism at the Yale University School of Architecture, where he teaches courses on architectural history and theory, urban history and design, and directs the School’s China Studio. He founded and directs the Yale Urban Design Workshop, a community design center that has undertaken urban design and building projects throughout Connecticut, and is now leading an international team designing a Peace Park on the Israeli-Jordanian border.