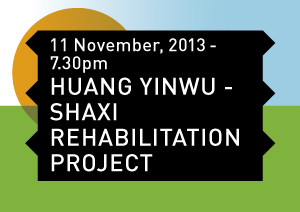 Huang Yinwu graduated from the Department of Architecture of Southeast University in 1996. He later studied at the Swiss Federal Institute of Technology Zurich and the University of Hong Kong. He worked at Southeast University and Nanjing University, where his research and practice mainly focused on heritage conservation and rural development. He was in charge of implementation of the Shaxi Rehabilitation Project for international charity funds from 2003 to 2012. Since 2011 he is directing the Shaxi Low Carbon Community Center Project.

In his lecture ‘Design in the Rural Context’ Huang Yinwu will argue that design in rural conditions is not just in place different from design in an urban situation. Due to the gap between urban and rural areas, design conditions in rural areas are very different and so is the realization process. In this context, the whole design process can’t escape from rural limitations such as local technology, culture and customs. As a project aiming at sustainable rural development, the Shaxi Rehabilitation Project has widely explored and examined the design in the rural context in its practice.