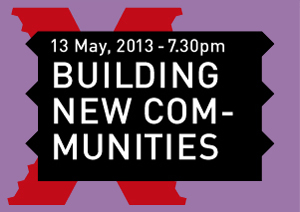 On Monday 13 May we host a lecture in the series ‘The Next Decade’ by Don Murphy, founder of Amsterdam based VMX Architects, titled ‘Building New Communities’. The innovative work of VMX Architects has always been centered on social issues. In all sectors of the work: infrastructure, housing, education, offices and public buildings, the main focus has been on thinking from the users, on integration, on making mixed communities.

Here will also lay the biggest challenge for the next decade: connecting people. Mobility in society in general but also within the field of Architecture has to be addressed. After a period of global mass consumption, that also affected the making of Architecture, definitely there is now a need to go beyond the Iconic. Connecting people and places will be back in the center of the discourse, both in the declining western world as in China, where also the next decade will be dominated by growth.

Don Murphy, educated in London and Amsterdam, founded VMX Architects in the Netherlands in 1995 after winning the Europan Competition. Since that moment the office won many competitions (among which in Ordos and Shanghai) and realized a great variety of projects. The work of the office achieved tremendous international attention and has been awarded with several prices. Murphy lectured on many Academies and Universities and is currently a professor of Architecture at Seoul University.