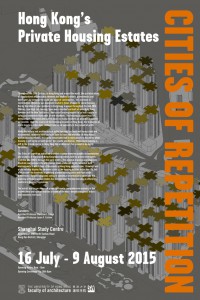 The exhibition Cities of Repetition will be presented in Shanghai at the University of Hong Kong / Shanghai Study Centre on 16 July 2015.  The show is prolonged until 8 August 2015.

Throughout the 20th Century, in Hong Kong and around the world, the prefabrication of standardized architectural elements has enabled builders, governments and developers to increase the scale and pace of construction.  This increase in construction efficiency was especially useful in times of need for social housing.   During the influx of new residents to Hong Kong in waves throughout the mid-20th Century, new high-rise housing types were invented and built all over Hong Kong, Kowloon and the New Territories.  New social housing needed to be built rapidly to safely accommodate thousands of new residents.  The housing produced was tall, dense and standardized and built to house as many residents as possible as quickly as possible.  Over the course of the following decades in Hong Kong, the strategies of mass standardization have shifted from social necessity to the pursuit of profit.

While the history and architecture of public housing has been well researched and documented, relatively little has been done to trace the evolution of Hong Kong’s private housing estates.  It is quite remarkable that in most places in the world, when housing is left to the private sector, the results are diverse.  When mass housing is left to the private sector in Hong Kong the architecture has proved to be highly formulaic.

The Cities of Repetition exhibition provides a comprehensive graphic documentation and analysis of the largest Hong Kong housing estates built by private developers from the late 1960’s through the early 2000’s.  The original drawings and diagrams illustrate and compare the ultra dense, mass produced, highly repetitive built environments in which tens of thousands of Hong Kong residents live.  Drawings and plans not only display the immense scale of the housing estates within the city, but also present the hundreds of similarly planned housing units and their subtle differences.  Detailed diagrams compare statistical information to show how the planning of these massive estates has evolved over the past decades to efficiently conform to building regulations.

The exhibit and larger research project present a comprehensive analysis of the architectural and spatial realities of some of the most densely populated, urban environments ever built.