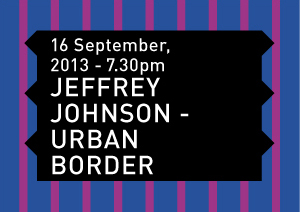 Jeffrey Johnson is the Co-director of the 2013 Shenzhen Bi-City Biennale of Urbanism \ Architecture, which opens in December this year.

With the theme ‘Crossing Urban Borders’, the Biennale wants to explore the “city” through the lens of borders, boundaries and edges. These conditions extend beyond merely physical borders to include those delineated by nonphysical and ephemeral forces, which might include the sociological, political, psychological, economic and environmental. As perfectly reflected in Chinese, the compound word ‘Bian Yuan’ (boundary) represents the concept of border, which does not merely mean physical border, but differences among diversified subcultures and distinctive identities.

Jeffrey Johnson is the founding director of China Megacities Lab, an experimental research unit at the Graduate School of Architecture, Planning and Preservation, at Columbia University, where he also teaches. He is also a co-founding principal of SLAB, an architecture and urbanism studio based in New York City.

His office, SLAB, founded in 2003, is a Brooklyn-based design studio with projects ranging from architecture, urban design and exhibition design, with projects located in the U.S., China, Italy, Costa Rica, Bahamas and Mexico.

Johnson lectures frequently in both China and the United States, organizes collaborative international China Megacities Lab/Columbia University design studios and workshops in China, and has organized and participated in a number of international forums and exhibitions. This month, Johnson teaches a studio at Tongji University, Shanghai. Together with Ole Bouman and Li Xiangning, Johnson is the co-director of this year’s Urbanism\Architecture Bi-City Biennale*Shenzhen (UABB*Shenzhen).