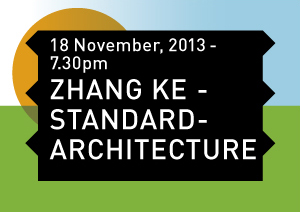 From 2010 to 2015, the hunger for urbanization in China is devouring 12 million acres of land per year. This is even more worrying when compared with the staggering 150 million acres of arable land, 8% of the total amount, consumed by urban sprawl from 1996 to 2010. These figures where revelaled by standardarchitecture during their research on and involvement with both the spatial and social struggle of the urban versus the rural. The question is: what action can a new generation Chinese architect take, facing this reality? Through buildings and projects that vary from rural to urban and in-between areas, Zhang Ke will discuss the evolving standpoints and rural-urban visions of standardarchitecture.

Zhang Ke is the founder of studio standardarchitecture, a leading new generation design firm engaged in practices of planning, architecture, landscape, and product design. Based on a wide range of realized buildings and landscapes in the past ten years, the studio has emerged as one of the most critical and realistic practice among the youngest generation of Chinese architects and designers.

Zhang Ke received his M-Arch from Harvard Graduate School of Design and his MA and BA from Tsinghua University in Beijing. The studio has won various awards, in China and abroad.