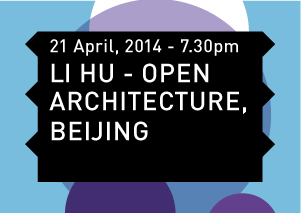 On Monday 21 April, architect Li Hu, founder of OPEN Architecture, will be speaking about the office’s thinking on architecture and urbanism through their recent works.

Against the backdrop of ultra fast urban development and a severe lack of joyful public spaces, OPEN Architecture has been actively seeking strategies that tackle these issues. With a mix of multifunctional programs and a city-like architectural complexity, the office investigates the potential of a collective urban life.