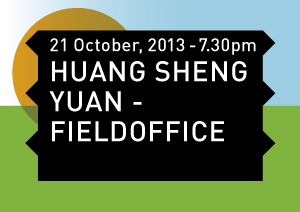 Huang Sheng-Yuan (Taipei, Taiwan, 1963) graduated from Tunghai University Dept. of Architecture and received his M. Arch. with Honors from Yale University. In 1994 he settled down in Yilan, where he founded Fieldoffice Architects. He is also the mentor of Field School, which initiates architectural actions with a group of young architects, gradually expanding to the re-development of local ecology, water, and the urban space.

Fieldoffice participated in the Venice Biennale and lectures at institutions all over the world, encouraging new generations to recognize the potential of Taiwan, by inviting people to explore the local possibilities of healthier and a more sustainable life.

Yilan is an agriculture area. The area is as big as Taipei, but has only a population of 460,000. In the past 20 years, the office only built houses that are within a 15km radius of its base.

Fieldoffice uses local material and local craftsmanship to regenerate old temples, reopen public spaces and turn a cement dike into grassland. The office insists to build all their projects themselves, be it in the city, the riverside or the mountains.