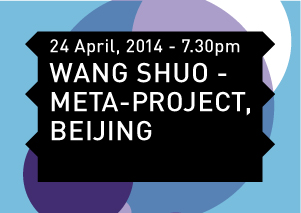 On 24 April, we will host a lecture by Wang Shuo, founder of META Project, Beijing. Wang Shuo’s lecture ‘Mega City, Grainy Matter: the Urban Motivation of [META:HUTONGS]’ will set out to examine a series of urban contradictions instigated by our increasingly urbanized world.

In Beijing the public discussions have become increasingly obsessed with the utopian idea of preservation, and yet pressure from developers is prompting massive demolition and rebuilding from a tabula rasa. In this relentless dystopic reality, Beijing’s hutongs are disappearing at a rapid pace with no alternative models for effective regeneration. Between the utopia and dystopia, Wang Shuo’s focus has lead to a 4-year long urban research project – [META:HUTONGS]. With co-curator Andrew Bryant, Wang initiated the project in 2012 as a cross-disciplinary collaborative platform to generate dialog with urbanists, anthropologists, historians, media artists, city-developers and entrepreneurs to examine, reveal and envision the unique quality of the contemporary urban emergence as it unfolds in the Hutongs, and to provide alternative models for projective future possibilities.

[META:HUTONGS] won the 2013-2014 Graham Foundation Grant for Advanced Studies in the Fine Arts. It is also supported by the Beijing Design Week, and is going to participate in the upcoming Venice Biennale in an official collateral event: Across Chinese Cities – Beijing.

Wang Shuo is an architect, urban researcher, and curator. He holds an MArch from Rice University’s School of Architecture. Wang has practiced extensively in New York, Rotterdam (OMA), and Beijing (associate partner at standardarchitecture) in the field of urban research and architecture. He founded META-Project in 2007 as a contemporary cultural platform intended to bridge design and research through interdisciplinary collaboration.