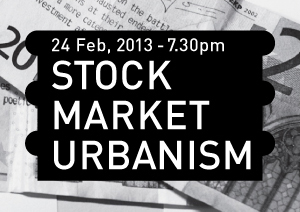 Bubbles and speculation are of all times. The 2008 financial crisis was largely caused by the subprime loan disaster in the United States. It turned out that housing was not anymore about community, living or emotions. Housing became about value, and investment.

With a lot of money in the market, for many years, it was incredibly easy to get a mortgage. On the one hand, prices increased, on the other, access to money was made even easier. The implosion of this system was comparable to the crash of the 1930’s. The biggest difference, however, was the lack of intervention by the government this time.

What actually happened in the US foreclosure crisis? What happens when buildings are no longer places to live, work or shop in, but mere objects of investment? What is the role of the government? What can we learn from it? And could the same happen in China as well?

These are main questions of the seminar ‘Stock Market Urbanism’.

Speakers and panellists are Adam Bobbette, Adrian Blackwell and Robert Chen.
Adam Bobbette is a landscape architect based in Hong Kong with training in philosophy and cultural studies. Adrian Blackwell is an artist and urban designer whose work focuses on the relation between physical space and political economic forces. Robert Chen, a Shanghai based real estate developer, will join in the panel.

The seminar will be followed by drinks to celebrate the Chinese launch of magazine Scapegoat, an independent, not-for-profit, bi-annual journal designed to create a context for research and development regarding design practice, historical investigation, and theoretical inquiry. Both Adam Bobbette and Adrian Blackwell are co-founders of Scapegoat.

The newest issue ‘Currency’ of magazine Scapegoat – with its feature article also translated in Chinese –  will be for sale at the event.