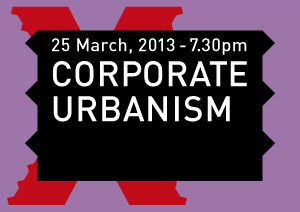 Monday 25 March we continue the lecture series ‘The Next Decade’ with a co-lecture by Steven Chen and Justin Stern, titled Corporate Urbanism: the spatiality of economic policy in Shanghai and Seoul. In this co-lecture, we will examine urban models in China and South Korea that are strongly driven by economic forces.

Since the establishment of Special Economic Zones in China, economic development zones have been critical drivers of investment and urbanization. In Shanghai, the creation of the Pudong New Area in the 1990s marked a shift from a manufacturing economy to a diversified set of economic priorities. As one of the four key zones, Zhangjiang High Tech Development Zone will be used as a case study in Steven Chen‘s talk. The physical urban structure, the development pattern, and the place-making strategies employed in the making of this urban zone are unique in function, form and scale.

The research by Justin Stern examines the connection between chaebols – a type of large-scale, family-owned corporate conglomerates such as Samsung or Hyundai – and urban development in Seoul. Although part of the debate on South Korea’s rapid economic growth is focused on chaebols, a structural analysis is still absent from the urban development discourse. The ‘chaebol urbanism’ that is emerging is marked by distinct urban characteristics, spatial hierarchies, and developmental trajectories.

Justin D. Stern is a graduate of the Master of Urban Planning Program at Harvard University Graduate School of Design (GSD) and currently serves as a Fulbright Fellow and a Harvard-Frederick Sheldon Traveling Fellow in Seoul, South Korea. His research focuses on the political economy of urban form in late industrializing countries in Asia.

Steven Y.N. Chen is an architect and Sinclair Kennedy Fellow at Harvard University, where he has completed his graduate studies in architecture and urban design. Prior to his studies at the GSD, he practiced at OMA in New York, Beijing, and Rotterdam. HKU/Shanghai Study Centre currently hosts Chen’s research activities.