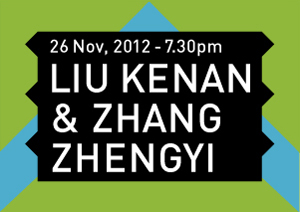 Atelier XÜK is a Shanghai-based design studio founded by Zhang Xu and Liu Kenan in 2010. In the year 2011 Lu Jun joined the studio as the third partner. Atelier XÜK regards itself as a slice into situations of contemporary Chinese architecture. It has established collaborations with universities, state-owned design institutes and independent designers. Atelier XÜK insists on critical intervention, both in the field of academia and practice.

Z+L Thing Architects is a Shanghai-based small office founded in 2010 by Zhang Zhengyi and Luo Qi. Zhang Zhengyi graduated from Tongji in 2006 and has worked in various offices before he started his own practice. Focusing on small-scale architecture, he seeks to express visions through concrete objects, which is articulated in the name of their office.

In Monday night’s lecture, both Atelier XÜK and Z+L Thing Architects will discuss a low budget project that they recently worked on.

Atelier XÜK will share their ambitious attempt of coordination between capitalization and cultural preservation. With the design of a new building material and introduction of its production-line to the locals, Atelier XÜK aims at a win-win situation of economy and tradition in the Daocheng-Yading area of Tibet.

The House#2 project is part of the Renewal Plan in Luxu Old Town, 80km west of Shanghai. The plan is an experiment of a renewal strategy in contemporary Chinese towns by exploring renovation typologies of obsolete factory buildings. Zhang Zhengyi will elaborate how Z+L Thing Architects managed to conceive and construct the space in 3 months from concept design to completion, under the constraint of extremely low budget.