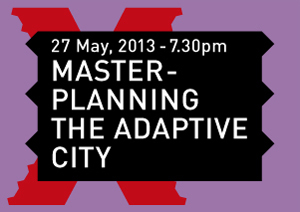 Parametric and algorithmic design tools remain largely untested in the field of urbanism. This Monday we will finish our series ‘The Next Decade’, with a lecture by Tom Verebes, titled ‘Masterplanning the Adaptive City’.

This lecture will sketch the historical, theoretical and technological foundation for an understanding of the city as inherently dynamic and evolutionary in its nature, and the ways in which the pre-eminent concepts and methodologies of masterplanning are inadequate to deal with an unstable, emergent, and unpredictable world. In a century when urbanisation is accelerating at unprecedented rates in some parts of the world, the notion of the masterplan as a conclusive document with which to determine the future is in crisis. The paradox of planning within an increasingly uncertain world is framed as an opportunity to with which to develop greater capabilities to adapt to, and manage, urban change in the twenty-first century.

Tom Verebes is Associate Dean (Teaching & Learning) in the Faculty of Architecture and Associate Professor in the Department of Architecture at the University of Hong Kong. Verebes was a Co-Director of the AA Design Research Lab (DRL) at the Architectural Association in London, where he had taught design studio and seminars in the post-professional MArch course from 1997-2009. He is the Director of the AA Shanghai Visiting School, hosted at the Shanghai Study Centre, as well as a former Guest/Visiting Professor at ABK Stuttgart. Tom is the founder and Creative Director of OCEAN.CN, a consultancy network of specialist design consultants based in Hong Kong. Tom has written, published, exhibited and lectured extensively in Europe, North America, Asia and the Middle East, and is a member of several Advisory Boards and Peer Review Boards.