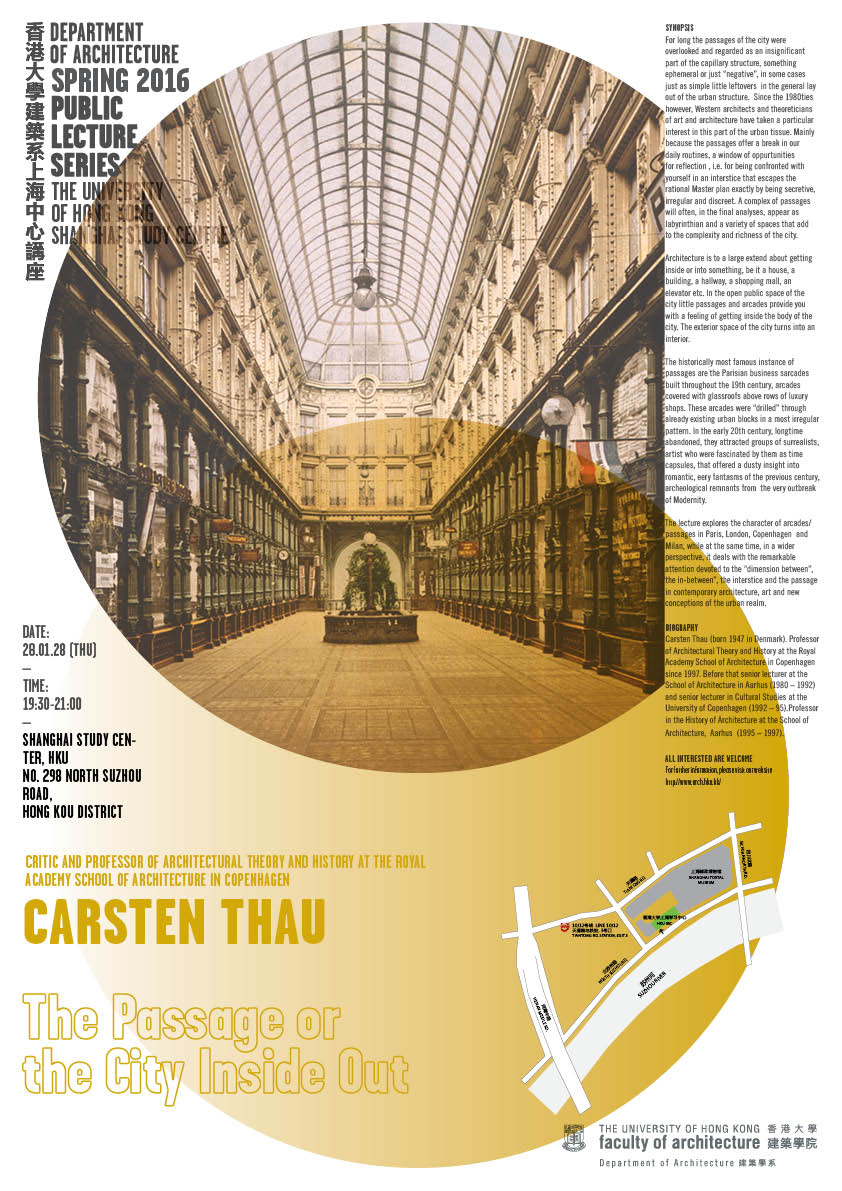 Lecture at the opening of the exhibition on Passages by Carsten Thau, professor of architectural History and Theory at The Royal Danish Academy´s Schools of Architecture, Design and Conservation.

The Passage or the City Inside Out

For long the passages of the city were overlooked and regarded as an insignificant part of the capillary structure, something ephemeral or just “negative”, in some cases just as simple little leftovers in the general lay out of the urban structure. Since the 1980ties however, Western architects and theoreticians of art and architecture have taken a particular interest in this part of the urban tissue. Mainly because the passages offer a break in our daily routines, a window of oppurtunities for reflection , i.e. for being confronted with yourself in an interstice that escapes the rational Master plan exactly by being secretive, irregular and discreet. A complex of passages will often, in the final analyses, appear as labyrinthian and a variety of spaces that add to the complexity and richness of the city.

The historically most famous instance of passages are the Parisian business sarcades built throughout the 19th century, arcades covered with glassroofs above rows of luxury shops. These arcades were “drilled” through already existing urban blocks in a most irregular pattern. In the early 20th century, longtime abandoned, they attracted groups of surrealists, artist who were fascinated by them as time capsules, that offered a dusty insight into romantic, eery fantasms of the previous century, archeological remnants from the very outbreak of Modernity.

The lecture explores the character of arcades/passages in Paris, London, Copenhagen and Milan, while at the same time, in a wider perspective, it deals with the remarkable attention devoted to the “dimension between”, “the in-between”, the interstice and the passage in contemporary architecture, art and new conceptions of the urban realm.

He has lectured extensively in Scnadinavia, Europe and North America. Guestprofessorships in Norway, Germany and Lithuania.

He is co-author of volumes on the British artist and filmmaker Peter Greenaway, Danish Designer and Architect Arne Jacobsen, apart from books on the role of The Frame in Art– issued by the Danish National Gallery in Copenhagen, furthermore the Dimension of time in Architecture, the relationship between architecture and philosophy. His books have laid the foundation for exhibitions at Kunstakademie Hamburg, MoMA in New York, MoMA in Oxford, Sao Paolo in Brazil and many other cities around the world. Has written numeruous articles on design, urban history, art and film, works translated into various languages. His productions for Television dealing with contemporary Danish architects and Modern Masters like Arne Jacobsen have been on show in the Nordic countries and Germany. His videoproductions on Vienna 1900 and Brirtish architect John Soane have won international prices.