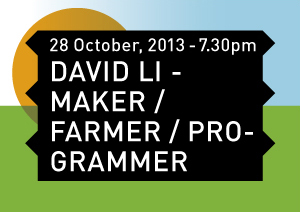 David Li has been contributing to open source since 1990. He is member of Free Software Foundation, committer to Apache projects and board of director of ObjectWeb. In the past 20 years, David has started several open source software projects and contributed to many. In 2010, he founded XinCheJian, the first hackerspace in China to promote hacker/maker culture and open source hardware. In the past years, Li started working urban farming, bringing the spirit of open source into farming and gardening.

In his lecture ‘Farm Together’ David Li will be speaking about the improvement of food production. Food safety is a major concern of the modern era. The food safety problem ranges from over use of pesticide to genetic modified plants to the pollution of the environment. The problem runs deeper then just in the farms. The industrial farms and production oriented system is the root of the problem and the third party certification such as Organic level is not a solution to such problem but merely a patchwork. ‘Farm Together’ aims to solve these problems. It is a platform linking city residents to the farmers near the cities to work together to produce safe, better and cleaner food through collaboration.