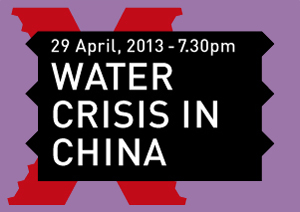 With 20% of the world population within its borders, China has only 7% of the global water resources. This Monday, we will host journalist Bert van Dijk in our lecture series ‘The Next Decade’, in which he will speak about China’s water crisis.

Bert van Dijk is the China correspondent for Het Financieele Dagblad and De Tijd, the two leading business newspapers in The Netherlands and Belgium. Van Dijk has been living in Shanghai since 2007 and has travelled extensively within the country. Before he came to China he was the technology reporter for Het Financieele Dagblad in Amsterdam and studied business economics at Groningen State University. In 2011 Van Dijk published ‘Along the Yellow River – Water Crisis in China’, in which he documents the challenges China faces in safeguarding its water needs.

In his lecture Bert van Dijk discusses the background of his book by taking you on his investigative journey along the Yellow River, from its source on the Tibetan Plateau to the estuary on China’s east coast. Illustrated by photos and movies he demonstrates the country’s looming water crisis and discusses the impact of desertification, industrialization and urbanization. He will discuss the 400 cities that suffer from water shortages, the construction of whole new cities for ecological refugees and will address some of the solutions China is hoping for to secure its water needs for the future.