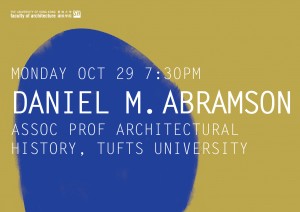 On Monday 29 October, 7.30 pm we will have the next lecture in the series IN FORM, by Daniel M. Abramson. His lecture is titled ‘Obsolescence, Sustainability, and Beyond’.

Daniel Abramson is associate professor of architectural history at Tufts University.  He is the author of Building the Bank of England: Money, Architecture, Society, 1694-1942 (Yale, 2005)  and Skyscraper Rivals: The AIG Building and the Architecture of Wall Street (Princeton Architectural Press, 2001), as well as numerous other articles and essays.  His current book project is on the idea of obsolescence in twentieth-century architecture.

Obsolescence was a primary means of conceptualizing and managing change in the twentieth-century built environment, an imagined world of short-life buildings consonant with consumer society expendability.  The lecture traces the invention of the idea of architectural obsolescence in early-twentieth-century America, and then its expansion into conceptions of urban obsolescence worldwide.  In the postwar period some architects embraced the liberating idea of architectural obsolescence, while many others recoiled at its implications of transient values and forms, leading to the rise of adaptive reuse, postmodernism, historic preservation, and sustainability.  The lecture concludes by examining the some lessons of obsolescence for our age of sustainability.