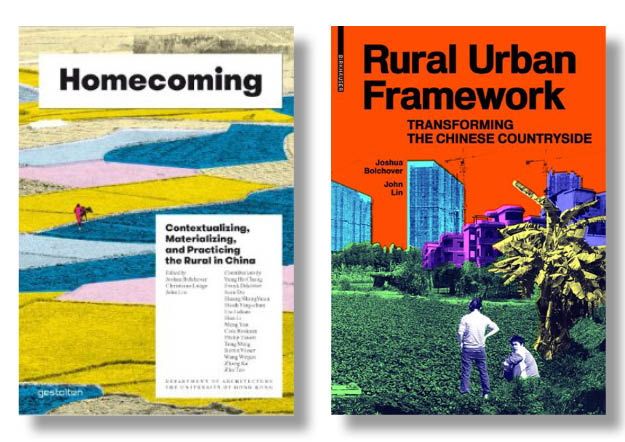 Tuesday, 3 December we’re hosting the last event in our lecture series ‘Down to Earth’. We’re excited to finish the series with the launch of two (!) books with a focus on the Chinese countryside.

Rural Urban Framework is a work group at the University of Hong Kong that not only researches the far-reaching changes of the last thirty years in China’s rural areas, but has also realized concrete projects aimed at improving supply and infrastructure on site. In their publication ‘Rural Urban Frameworks’, the authors Joshua Bolchover and John Lin present for the first time the results of their research as well as their built projects in the Chinese backlands, and question whether China’s only future model lies in cities.

The publication ‘Homecoming’, edited by Christiane Lange, John Lin and Joshua Bolchover, presents work by an emerging generation of Chinese architects that uses unique design and working approaches to resist generic mass construction and foreign iconic building. In particular, these architects are offering resistance against the rapid urbanization that has dominated the Chinese landscape. By responding to a local Chinese context, they have raised the avant-garde of China’s architectural design practice in recent years.

Joshua Bolchover is currently an Assistant Professor at The University of Hong Kong. His current research focuses on the complex urban-rural ecology of cities. He set up Rural Urban Framework with John LIn in 2005 with the remit to create a not-for-profit agency as a platform for design and research. Their projects have been exhibited at the Venice Biennale 2010, the Chengdu Biennale 2011, and at Eastern Promises at the Mak, Vienna in 2013.  RUF has been shortlisted for the Icon Emerging Architectural Practice of the Year Award 2013 and Architectural Record’s Design Vanguard 2013.

Christiane Lange is a Tutor at the Department of Architecture at The University of Hong Kong. She teaches Urban Design in the Bachelor Program and works in the Community Project Workshop, where her work includes the design of school buildings in rural China, as well as research on China’s urban and rural development. Her research and interest addresses the urbanization process of developing countries.

Joshua and Christiane will be speaking about the respective books, followed by drinks to celebrate these new and timely publications!