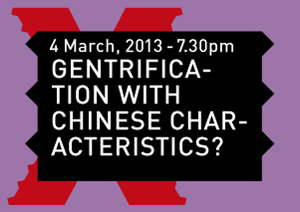 As the first speaker in the spring lecture series ‘The Next Decade’ we will have architect and researcher Zhou Ying from Future Cities Lab in Singapore. In her lecture ‘Gentrification with Chinese characteristics? On Shanghai’s city center transformations’ She will be focusing on the development of Shanghai.

Since Shanghai became the “dragon’s head,” its city center neighborhoods underwent tremendous transformations. Focusing on the western end of the French concession that largely survived (so far) the ongoing demolition-and-reconstruction cycle, this talk will unpack how the transformations in the urban fabric is embedded in its recent historic legacies, as well as how its global aspirations are specifically inflected by local frameworks. Not as eye catching as the towers that rise to echo GDP growth or the satellite towns, international schools and shopping malls that epitomize the former colonial metropolis’ re-globalization, the role for the centrality seem to remain important to the future development of the metropolis, despite its shifting identity. The presiding forces, including governance structures and public-private alliances that mediate the stakes for heritage, housing, and commerce, are crucial for strategies of future development of not only Chinese cities, but of historic city centers in developing economies undergoing accelerated structural change.

Zhou Ying is an architect researching and teaching at the Future Cities Laboratory, a newly established ETH center in East Asia sited in Singapore. Prior to turning her focus to Shanghai and Singapore’s city center transformation processes as potential strategies for the future, she taught at the ETH Studio Basel on the research studios for Kolkata, Damascus and Cairo, and where she also produced an urban comic book about MetroBasel. She has published in Critical Planning, Urban China, Monu, amongst others, and her work has exhibited at the Swiss Architecture Museum in Basel and the Haus der Kunst in Munich. She is trained at Princeton (B.S.E.) and Harvard (M.Arch) and was a Fulbright Fellow at the University of Stuttgart.