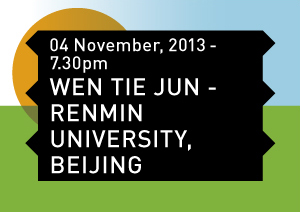 Professor Wen Tiejun (Beijing, 1951) is a renowned expert on social-economic sustainable development and rural issues. Professor Wen serves as the Executive Dean at the Institute of Advanced Studies for Sustainability and is the Director of the Institute of Rural Finance at Renmin University, Beijing. His lecture is titled ‘Global Crises and the Chinese Solution’.

Since the founding of the People’s Republic of China in 1949, its social structure has changed dramatically. China is creating a middle class, which decides the basic social structure of the country’s ‘steady pyramid’.
Under the threat of crisis, developed countries have been transferring their crisis to developing countries. Over the past 60 years of Chinese industrialization, 8 economic crises have happened. Most of them landed softly in the cities, under the condition of having the rural/countryside as its carrier. The crises that could not be transferred created a strong force for institutional change.

At present, China takes advantage of its vast size, promoting the construction of a ‘new countryside’ and townships as its urbanization model, which is an effective method against the global crisis and maintaining economic growth. It’s important to understand this concept of  ‘de-urbanization’ in the process of implementation of urban-rural integration.

This concept of ‘Townshipzation’ does not mean to export traditional, highly polluted industries into towns and villages nor increase the urban population.  Townshipzation should create non-agricultural jobs for peasants within a short distance from the town center. It should attract middle and small entrepreneurs based on a certain amount of infrastructure. This is the way to dissolve the problems of concentration of industries and overpopulation in the big cities. Meanwhile the development of townships should take ecology into consideration, retaining local eco systems, history, human as well as cultural resources and respect the existing diversity of the social structure.