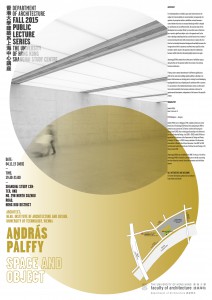 On 4 November, we will be hosting a lecture by András Pálffy, head of the Institute of Architecture and Design at TU, Vienna, at 7:30pm. András Pálffy’s lecture will speak about the relationship between content, architectural form and materiality.

The interdependency of exhibit, space and visitor has been the subject of intensive debate in recent decades. Consequently, the question of perception within an exhibition context becomes a central theme that arises in a museum landscape which is shaped by contributions of very different kinds. The extreme ends of this development are occupied, firstly, by a view that sees architecture as an auratic, significant object, and, at the opposite end, by the wish to develop something that has a useful function into a notion of constructional perfection. Both extremes have in common the fact that the functionally determined background inevitably becomes the foreground and with its presence outshines every specific artistic statement, which results in the question about the relationship between exhibit and visitor becoming highly topical once again.

Jabornegg & Pálffy examine the architecture of exhibition spaces along the lines of this question within the context of an existing historic architecture.

Finding a clear common denominator for different significances while at the same time enabling spatial qualities to develop is an aspect that becomes our starting point in striving for and developing typologically clear, but yet highly specific solutions within a context. For us precision in the relationship between content, architectural form and its materiality thus becomes a decisive reference for quintessential statements, independent of the format of the specific project.

After graduating in 1985 he worked as an assistant at TU, Vienna, Institute of Housing and Design (until 1992). After a visiting professorship at the University for Art and Industrial Design, Linz (2001–2002), András Pálffy was appointed full professor at the Department of Design and Theory of Design, TU, Vienna, in 2003. He was president of the Secession, Association of Visual Artists Vienna Secession, from 2007 to 2013 and has been head of the Institute of Architecture and Design at TU, Vienna, since 2012.