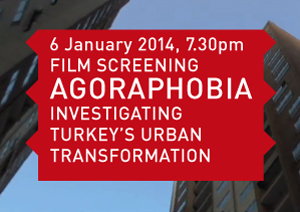 AGORAPHOBIA – Investigating Turkey’s Urban Transformation
What happens when a prime minister decides to build a shopping mall on one of the last patches of green in the centre of Istanbul? It resulted in an unprecedented wave of protests that covered Turkey and sparked a response in Brazil.
‘Agoraphobia’ focuses on the practices of urban transformation that in part led up to this public outburst: the large-scale demolition of ‘informal’ neighbourhoods and the construction of mass housing.
An international team of architects, urban planners and a film crew went to Turkey to study this urban transformation process in the three (former) capital cities of Ankara, Bursa and Istanbul. Agoraphobia tells their story.

The movie screening will be followed by a panel discussion with makers Chris Luth and Merve Bedir and Shanghai based filmmaker Shu Haolun.

Chris Luth is a curator and moderator. Luth worked as an architect and organised debates and workshops worldwide for the Netherlands Architecture Institute. Chris Luth is currently jury member of the Jaap Bakema Fellowship, a correspondent to Uncube Magazine (Berlin) and contributes to various periodicals on architecture and urban development.

Merve Bedir was involved in a variety of architectural design projects in Turkey, Egypt and Georgia until 2008. Since then, she has been conducting her PhD research on user behaviour and energy consumption in Dutch housing at Delft University of Technology. Bedir recently co-curated two projects for the Netherlands Architecture Institute.

Shu Haolun has a studied filmmaking in Southern Illinois University and holds a MFA degree in film. After his return to Shanghai in 2003, he produced, wrote and directed award-winning documentary and fictional films. Currently he also teaches at the Film School of Shanghai University. His first fictional feature film ‘No. 89 Shimen Rd’ is distributed by Trigon-film and released in Europe.