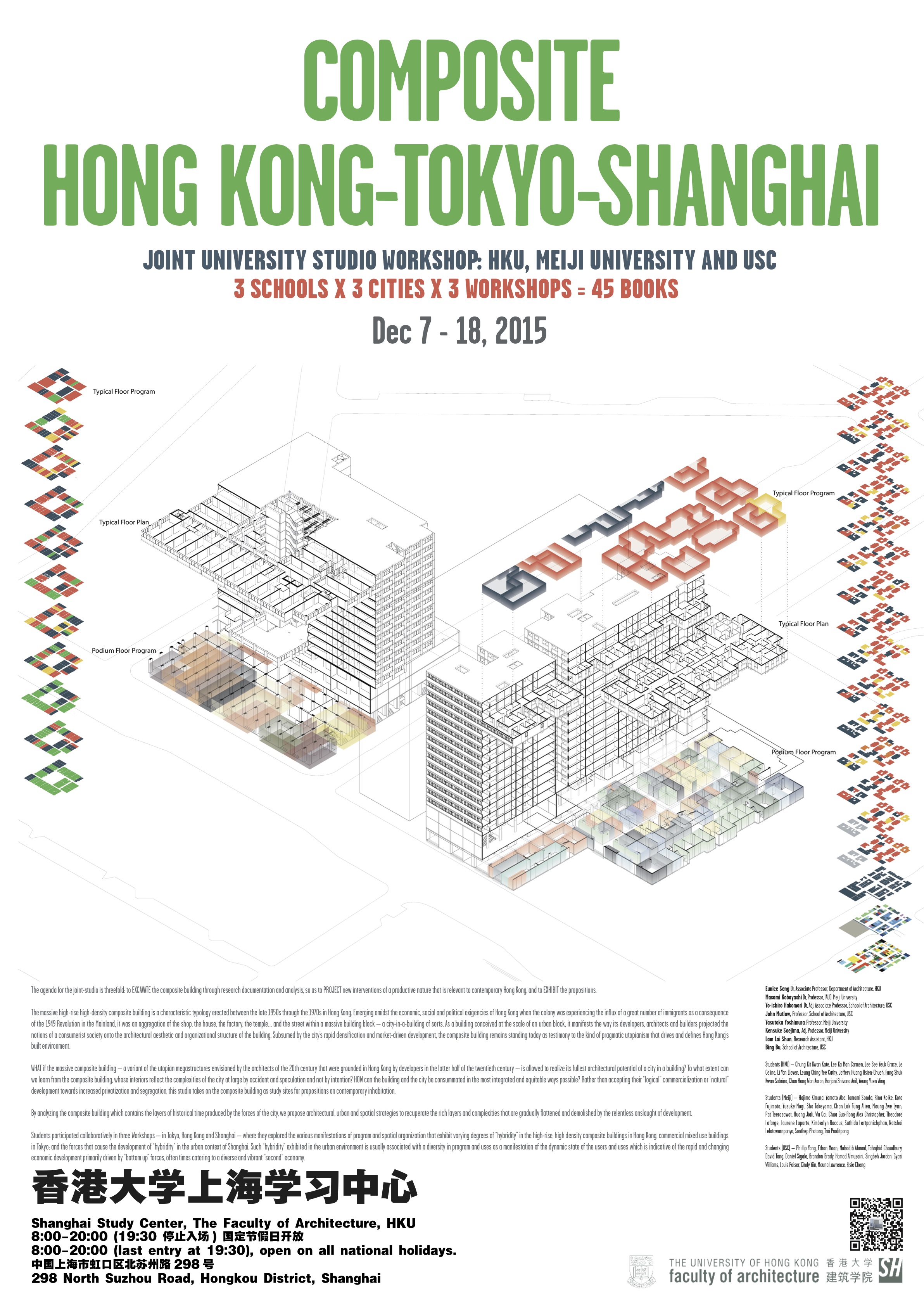 The agenda for the joint-studio is threefold: to EXCAVATE the composite building through research documentation and analysis, so as to PROJECT new interventions of a productive nature that is relevant to contemporary Hong Kong, and to EXHIBIT the propositions.

The massive high-rise high-density composite building is a characteristic typology erected between the late 1950s through the 1970s in Hong Kong. Emerging amidst the economic, social and political exigencies of Hong Kong when the colony was experiencing the influx of a great number of immigrants as a consequence of the 1949 Revolution in the Mainland, it was an aggregation of the shop, the house, the factory, the temple… and the street within a massive building block – a city-in-a-building of sorts. As a building conceived at the scale of an urban block, it manifests the way its developers, architects and builders projected the notions of a consumerist society onto the architectural aesthetic and organizational structure of the building. Subsumed by the city’s rapid densification and market-driven development, the composite building remains standing today as testimony to the kind of pragmatic utopianism that drives and defines Hong Kong’s built environment.

WHAT if the massive composite building – a variant of the utopian megastructures envisioned by the architects of the 20th century that were grounded in Hong Kong by developers in the latter half of the twentieth century – is allowed to realize its fullest architectural potential of a city in a building? To what extent can we learn from the composite building, whose interiors reflect the complexities of the city at large by accident and speculation and not by intention? HOW can the building and the city be consummated in the most integrated and equitable ways possible? Rather than accepting their “logical” commercialization or “natural” development towards increased privatization and segregation, this studio takes on the composite building as study sites for propositions on contemporary inhabitation.

By analyzing the composite building which contains the layers of historical time produced by the forces of the city, we propose architectural, urban and spatial strategies to recuperate the rich layers and complexities that are gradually flattened and demolished by the relentless onslaught of development.

Students participated collaboratively in three Workshops – in Tokyo, Hong Kong and Shanghai – where they explored the various manifestations of program and spatial organization that exhibit varying degrees of “hybridity” in the high-rise, high density composite buildings in Hong Kong, commercial mixed use buildings in Tokyo; and the forces that cause the development of “hybridity” in the urban context of Shanghai. Such “hybridity” exhibited in the urban environment is usually associated with a diversity in program and uses as a manifestation of the dynamic state of the users and uses which is indicative of the rapid and changing economic development primarily driven by “bottom up” forces, often times catering to a diverse and vibrant “second” economy.