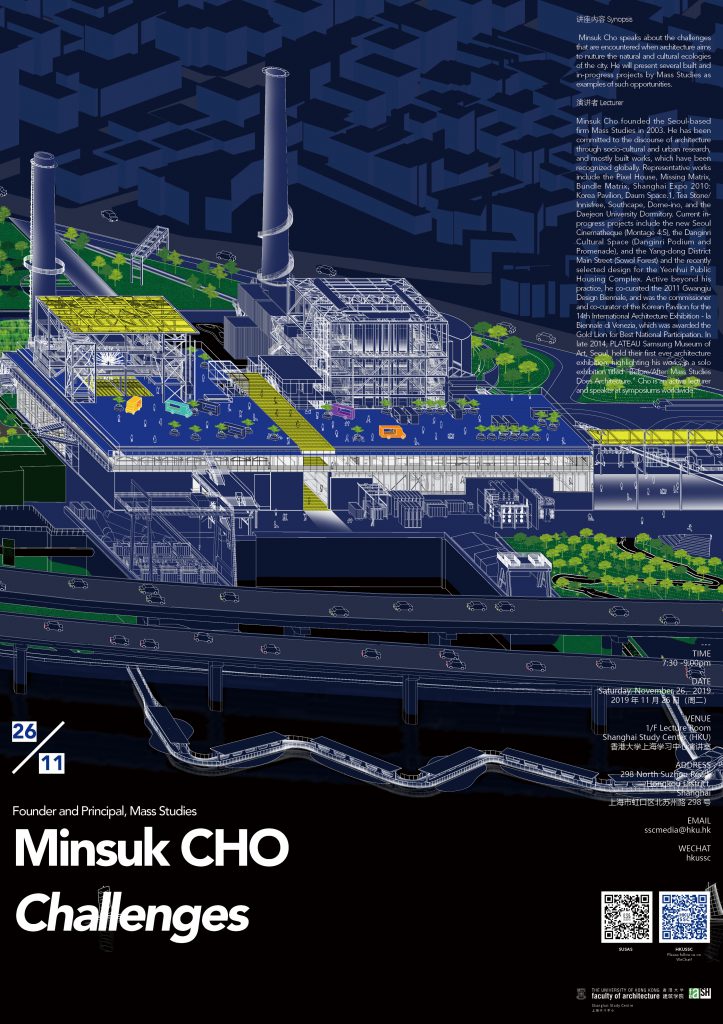 Minsuk Cho speaks about the challenges that are encountered when architecture aims to nuture the natural and cultural ecologies of the city. He will present several built and in-progress projects by Mass Studies as examples of such opportunities.

Minsuk Cho founded the Seoul-based firm Mass Studies in 2003. He has been committed to the discourse of architecture through socio-cultural and urban research, and mostly built works, which have been recognized globally. Representative works include the Pixel House, Missing Matrix, Bundle Matrix, Shanghai Expo 2010: Korea Pavilion, Daum Space.1, Tea Stone/Innisfree, Southcape, Dome-ino, and the Daejeon University Dormitory. Current in-progress projects include the new Seoul Cinematheque (Montage 4:5), the Danginri Cultural Space (Danginri Podium and Promenade), and the Yang-dong District Main Street (Sowol Forest) and the recently selected design for the Yeonhui Public Housing Complex. Active beyond his practice, he co-curated the 2011 Gwangju Design Biennale, and was the commissioner and co-curator of the Korean Pavilion for the 14th International Architecture Exhibition – la Biennale di Venezia, which was awarded the Gold Lion for Best National Participation. In late 2014, PLATEAU Samsung Museum of Art, Seoul, held their first ever architecture exhibition, highlighting his works in a solo exhibition titled “Before/After: Mass Studies Does Architecture.” Cho is an active lecturer and speaker at symposiums worldwide.