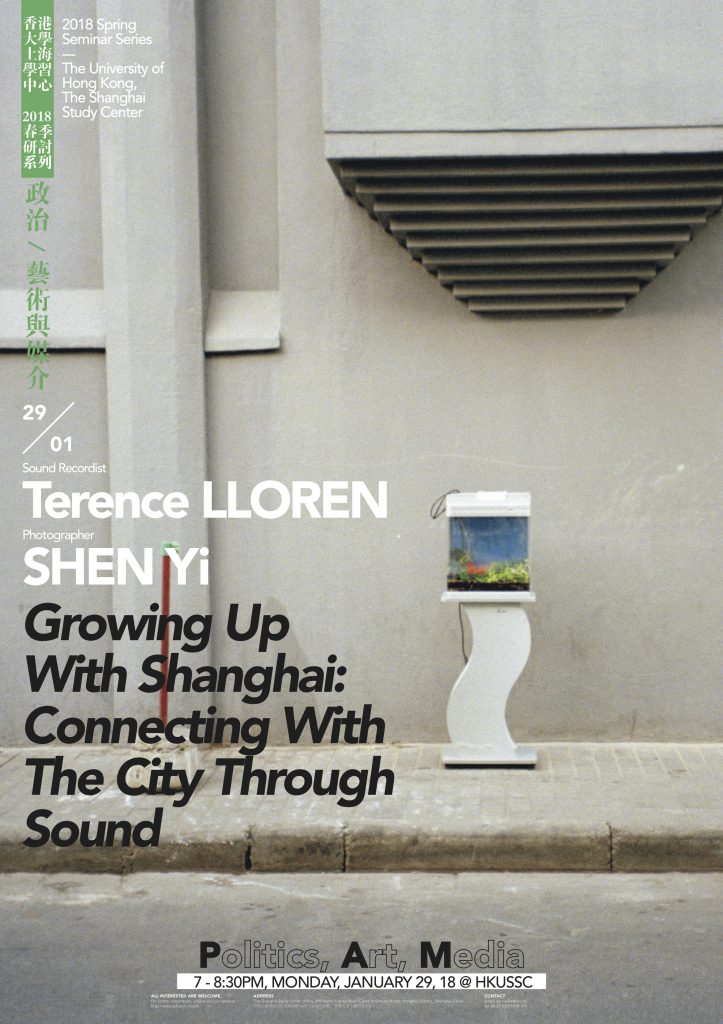 Growing Up With Shanghai: Connecting With The City Through Sound

The lecture will talk about the Growing Up With Shanghai sound project – how the artists can use sound to have a deeper connection with the non-visual aspects of our urban and natural surroundings, and how do photographic images provoke the collective memory of hometown.

Terence LLOREN has a degree in Architecture and had worked in the profession for 8 years before moving to Shanghai in 2006. His passion for sound and music led him to take night classes for audio engineering and in 2009 began his profession as a sound recordist. His experience has taken him all over China, Asia, and the US working on reality shows, short films, corporate videos, and award-winning documentaries. Terence also produces his own ‘sound documentaries’ that focus on using sound in creative ways to connect people with their surroundings and to create awareness of the non-visual aspects of humanity such as language dialects, local culture, and relationships with nature. He founded his label, Bivouac Recording, in 2003 and since 2009 has been releasing socially-relevant field recording album projects such as “Growing Up With Shanghai”, “60 Minute Cities”, and “Social Tapes”. For more information about Bivouac Recording please visit: http://www.bivouacrecording.com

SHEN Yi was born in the 80s in Shanghai. She received her undergraduate degree from Tongji University and her masters degree from the City University of Hong Kong. She is a filmmaker, poet, journalist, literary critic, and film critic. For her poetry writing, she won awards for two consecutive years in the Hong Kong “City Literature Festival” event (2008-2009). Her work “Empty Chairs” (The philosophy of chairs) was exhibited in the Lishui International Photography Festival (2009). Her work “Dismantled Notebooks” was featured in: the Dali International Photography Festival (2011), Trans-Asia Photography Review magazine (2012), and the Toulouse Female Photography Festival (2013). She has exhibited her photography in Italy at the A+A Multimedia Art Center (2011). She curated poet and photographer, Beidao’s first exhibition (2012). Her work “Fans” was included in the Shanghai Women’s Photographer’s exhibition (2013). She participated in the “My French Film Festival” review jury (2013). She participated in the Chinese Film and Media Awards jury (2012, 2014). Recently, she was art consultant and joint producer for the Golden Horse Nominated film “少女哪吒” (Nezha) (2014).