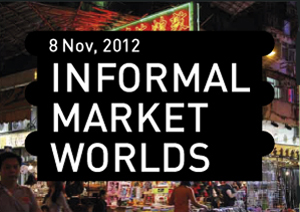 Informal markets have emerged as a vital part of cities around the world, from the new mega-cities of the Global South to the old centres of political and economic power. Spurred by deregulation and accelerating global flows, they are commonly tolerated as shock-absorbers of widening social divisions. Yet, whenever these markets show signs of establishing realms of their own official rhetoric paints them as threat to social and economic order, often followed by governmental actions of demolition, re-location or privatization.

Debating the spatial culture of informal markets as an arena of negotiation between multiple political demands, social actors and environmental constraints, ‘Informal Market Worlds II’ departs from the question of how we can build more equal participation in the space of economy vis-à-vis the economy of space. In what ways can the spatial practices and cultural mechanisms that sustain informal markets help us in articulating progressive policies more adapt to the transnational realities of today’s populations?

A two-day event of presentations and discussions, ‘Informal Market Worlds II’ will bring together research on the architecture and visual culture of informal markets with a range of case studies from across Asia and beyond. In addition to input from theorists in the fields of urbanism and political economy, the meeting will include presentations by architects, artists and activists on a range of informal market places such as pirate media markets in India, urban villages in Shanghai, fractal spaces in Jakarta and the spatial self-organisation of domestic helpers in Hong Kong.

16:00 Beyond Improvement – How the informal challenges our notion of practice
panel discussion with all speakers
chaired by Matias Viegener, Fallen Fruit, Los Angeles

This research gathering at the University of Hong Kong’s Shanghai Study Centre is part of an itinerant series of conferences world-wide, with further meetings at UC San Diego (February 2012) and in Istanbul (spring 2013). Outcomes of these gatherings will be published in an atlas and a textbook by nai010 Publishers, Rotterdam in autumn 2013.

This event is free and open to the public.
No registration required.