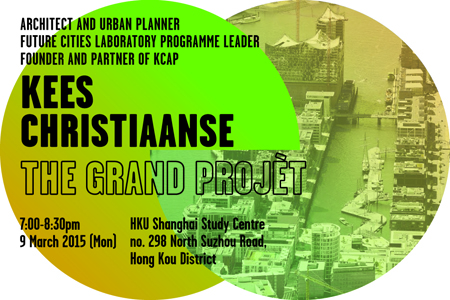 On 9 March, we will be continuing our Spring 2015 public program with a talk by Prof. Ir. Kees Christiaanse, Architect and Urban Planner, Future Cities Laboratory Programme Leader, founder and partner of KCAP at 7:00pm. He will explore the characteristics and mecha­nisms of the Big Project or Grand Projèt in urban devel­opment in contemporary European and Asian cities, in order to acquire knowledge on how these projects emerge, how they are conceived and designed, how they function, how they transform over time, and how they influence their urban context. The broader aim of the research is to make this knowledge available as an aid to the evalua­tion and design of such projects.

In Europe as well as the Americas and Asia, Grand Projets have become important means of urban renewal, urban development, and the creation of new urban territo­ries. But the extend to which these projects are results of precise urban strategies, or pragmatic reactions to uncontrollable urbanisation varies. Despite their wide acceptance in urban renewal policies, the role they play in their urban contexts it is not always clear and has rarely been comparatively assessed.

• What motives are behind the choice of sites and pro­gramme of Grand Projets?
• How are they conceived and implemented?
• What are their structural and typological characteristics?

Kees Christiaanse studied architecture and urban plan­ning at the TU Delft. From 1980 until 1989 he worked for the Office of Metropolitan Architecture (OMA) in Rot­terdam, becoming a partner in 1983. In 1989 he founded his own office ir. Kees Christiaanse Architects & Planners in Rotterdam, KCAP since 2002, which expanded to Shanghai and Zurich. From 1996 until 2003 he taught architecture and urban planning at TU Berlin (DE). Since 2003 he is professor at the ETH in Zurich (CH). In 2009 he was curator of the International Architec­ture Biennale Rotterdam (IABR) entitled “Open City. Designing Coexistence”. Since 2011 he is Programme Leader of the Future Cities Laboratory in Singapore and Principal Investigator as well as Module Leader for Module IV ‘Urban Design Strategies and Re­sources’.  Kees is chairman of the advisory board of the Singapore University of Technology and Design (SUTD). Next to his work as an architect, Kees focuses on urban assignments in complex situations and guiding urban processes. He is a consultant to several airports and expert in the development of university campuses and in the revitalisation of former industrial, railway and harbour areas.