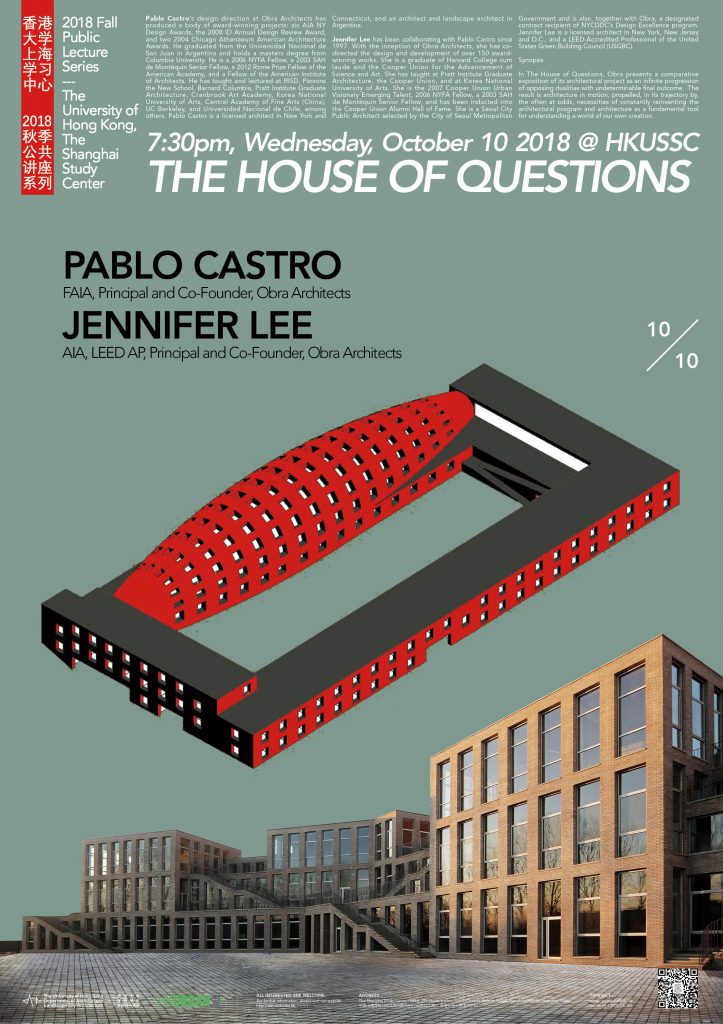 The House of Questions

In The House of Questions, Obra presents a comparative exposition of its architectural project as an infinite progression of opposing dualities with undeterminable final outcome.  The result is architecture in motion, propelled, in its trajectory by, the often at odds, necessities of constantly reinventing the architectural program and architecture as a fundamental tool for understanding a world of our own creation.

Pablo Castro’s design direction at Obra Architects has produced a body of award-winning projects: six AIA NY Design Awards, the 2008 ID Annual Design Review Award, and two 2004 Chicago Athenaeum American Architecture Awards. He graduated from the Universidad Nacional de San Juan in Argentina and holds a masters degree from Columbia University. He is a 2006 NYFA Fellow, a 2003 SAH de Montëquin Senior Fellow, a 2012 Rome Prize Fellow of the American Academy, and a Fellow of the American Institute of Architects. He has taught and lectured at RISD, Parsons the New School, Barnard Columbia, Pratt Institute Graduate Architecture, Cranbrook Art Academy, Korea National University of Arts, Central Academy of Fine Arts (China), UC Berkeley, and Universidad Nacional de Chile, among others. Pablo Castro is a licensed architect in New York and Connecticut, and an architect and landscape architect in Argentina.

Jennifer Lee has been collaborating with Pablo Castro since 1997. With the inception of Obra Architects, she has co-directed the design and development of over 150 award-winning works. She is a graduate of Harvard College cum laude and the Cooper Union for the Advancement of Science and Art. She has taught at Pratt Institute Graduate Architecture, the Cooper Union, and at Korea National University of Arts. She is the 2007 Cooper Union Urban Visionary Emerging Talent, 2006 NYFA Fellow, a 2003 SAH de Montëquin Senior Fellow, and has been inducted into the Cooper Union Alumni Hall of Fame. She is a Seoul City Public Architect selected by the City of Seoul Metropolitan Government and is also, together with Obra, a designated contract recipient of NYCDDC’s Design Excellence program. Jennifer Lee is a licensed architect in New York, New Jersey and D.C., and a LEED-Accredited Professional of the United States Green Building Council (USGBC).