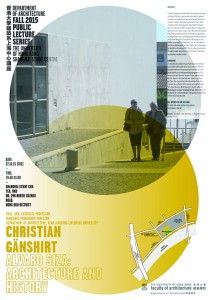 We will be kicking off our Fall 2015 public program with a lecture by Christian Gänshirt, Ph.D., AKB, Associate Professor, MArchDes Programme Director. This lecture gives an overview on how Alvaro Siza’s approach to architecture developed over time, under changing political and economic conditions.

The work of Portuguese architect Álvaro Siza has grown over almost six decades. Among Siza’s earliest works to gain public attention were the swimming pool facilities (named Piscinas de Marés) he created in the 1960s for Leça da Palmeira, a fishing town and summer resort north of the port city of Matosinhos. The dramatic years of the Carnation Revolution of 1974 opened new possibilities, resulting in large-scale social housing projects like Bouça in Oporto and Quinta da Malagueira in Évora. With his Berlin projects in the 1980ies, Siza entered the international scene. He rose to national prominence with the reconstruction of Lisbon’s historic Chiado area, devastated by a fire in August 1988. Over the following two decades, Portugal’s economy was going very well, offering Siza some great opportunities to realize his ideas.

Christian Gänshirt worked with José Paulo dos Santos and Álvaro Siza in Oporto and has published on Siza’s work since 1993. He is Associate Professor of Architectural Theory and Director of the professional Master of Architectural Design programme at Xi’an Jiaotong-Liverpool University, located in Suzhou Industrial Park. Gänshirt studied at Karlsruhe University, and with Luigi Snozzi and Pierre-Alain Croset at the École Polytechnique Fédérale de Lausanne. He practiced in Berlin, Germany, and taught at Virginia Tech, Kassel University, Berlin University of the Arts, and at the Brandenburg University of Technology. His book “Tools for Ideas – An Introduction to Architectural Design” is being used internationally in architectural design education.