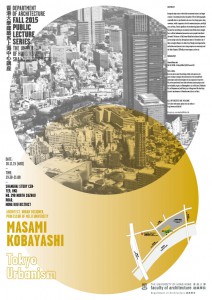 On 18 November, we will be continuing our Fall 2015 public program with a talk by Prof. Masami Kobayashi, architect, urban designer and professor of Meiji University at 7:30pm. This lecture will track the history of Edo/Tokyo and the recent legal constraints which has strognly

influenced the current urban form of Tokyo. It will try to focus some of the several good practices  trying to change its townscape.

Among the major cities in the world, international status is no longer a matter of economic power but the quality of life of the living people, especially when it is purchased at the cost of tiny living spaces, long commutes, traffic congestion, a lack of common open space, and high costs of living.  Tokyo’s significant role in advancing Japan forward to become the second largest economy in the world has been changed, but it still has fundamental potential to attract people from all over the world. The history of Edo (former Tokyo) had cultivated Japanese current unique style, but the legal constraints of the modern city of Tokyo strongly influences its urban form. Though several good urban and architectural practices are trying to improve its townscape, and the Tokyo Olympics 2020 will give more impacts to the city.

An active practitioner & teaching scholar, who pursues the new strategy to mitigate the preservation of our natural/built environment and the development of our progressive future life. His professional works have dealt with many private projects and several public projects in Kakamigahara city in Gifu ward, Takahashi City in Okayama ward, and Himeji city in Hyogo ward. He also helps citizen’s involvements in Shimokitazawa district in Tokyo.